This post may contain affiliate links for products I recommend, as an Amazon Associate I earn from qualifying purchases. This does not change the price you would pay. 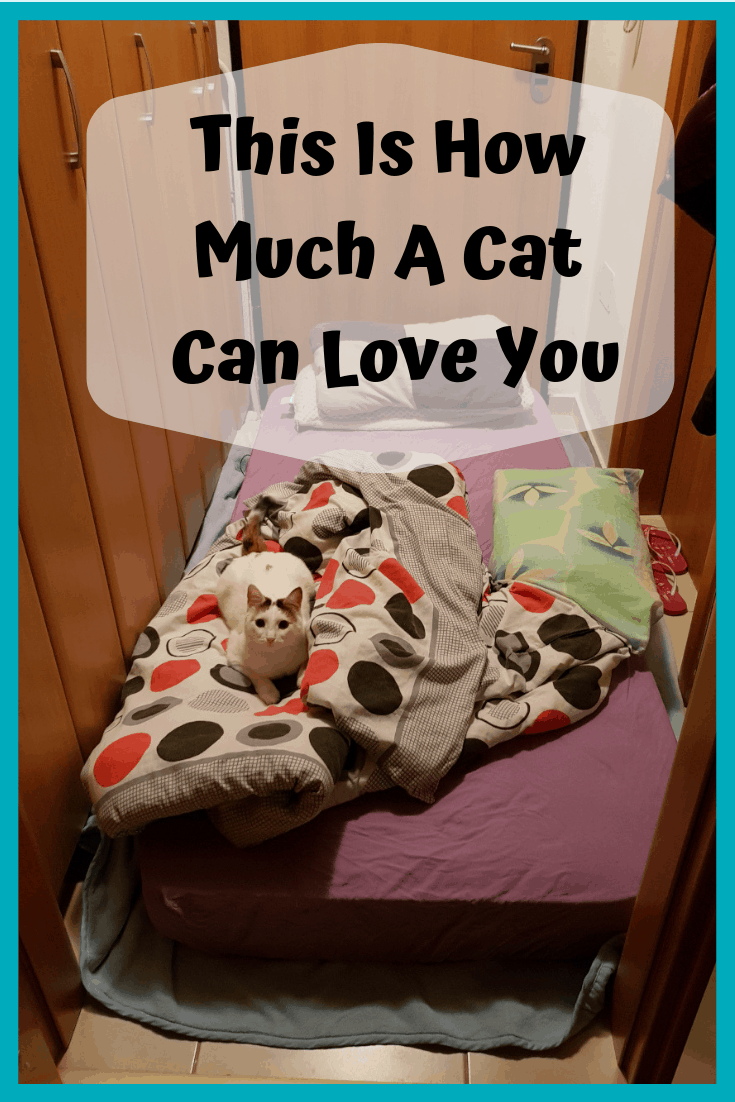 Last summer the neighborhood bar got a new owner. Initially, I was happy about it: they started renovating the old look and I thought it would be a modern bar to enjoy near my apartment. The bar is really close, in the corner of the neighborhood building.

Six months later it turned out to be a total disaster: the owner is a policeman (in translation no one can touch him) who cares only about profit and our neighborhood has had no peace ever since.

The music they play is so loud that at moments it seems like a whole band is playing in the middle of my room. And I am not even in the same building as the bar. The noise and the vibrations must be completely unbearable in there. Poor people.

Just as an example they played Nirvana “Smells Like Teen Spirit” in the middle of a work week, around midnight, and it was so loud as if we were in the middle of a desert and not in an urban place where people live and need to sleep.

I can not imagine having little kids in such circumstances. People must be going absolutely crazy.

Well, I am going crazy that’s for sure! Nothing helps: I’ve called the police and they offered to come to an informative talk in my home. Yes, that is what I give my tax to, for the police to do absolutely nothing and their own to be above the law. The owner is simply untouchable.

I’ve even written a handwritten letter to the owner, suggesting that there are people living in these buildings. The very next night the music was even louder!

I am writing this post around midnight on a working day simply because I can’t sleep anymore :(. The music stops around one o’clock after midnight but I am an early riser so I like to go bed early and wake up early. A lifestyle that used to have that is impossible now.

I’ve ordered soundproof windows, an expense I did not need without the bar downstairs as my apartment is only 5 years old and except for the noise I have no need to replace them. If this measure does not help I’ll be forced to move.

Just when I finally organized my life here, got to know all the shortcuts and places I needed like car wash, shops and similar. Just when I discovered a nice path for after work walks. Being forced into this change! I am so so so mad! And so sad at the same time.

In my despair, I’ve even tried sleeping in my hallway. You can see on the image above how I dragged my mattress and luckily the hallway is just big enough for it. Unfortunately, it did not work: it is too cold there, the cold creeping from outside, the place is just too small when I close the door and I have an uneasy feeling like I’m inside of a coffin. Just too creepy. The music is bearable though but I was not able to sleep peacefully in there.

Ok so to the owner of the bar I would like to dedicate this song: 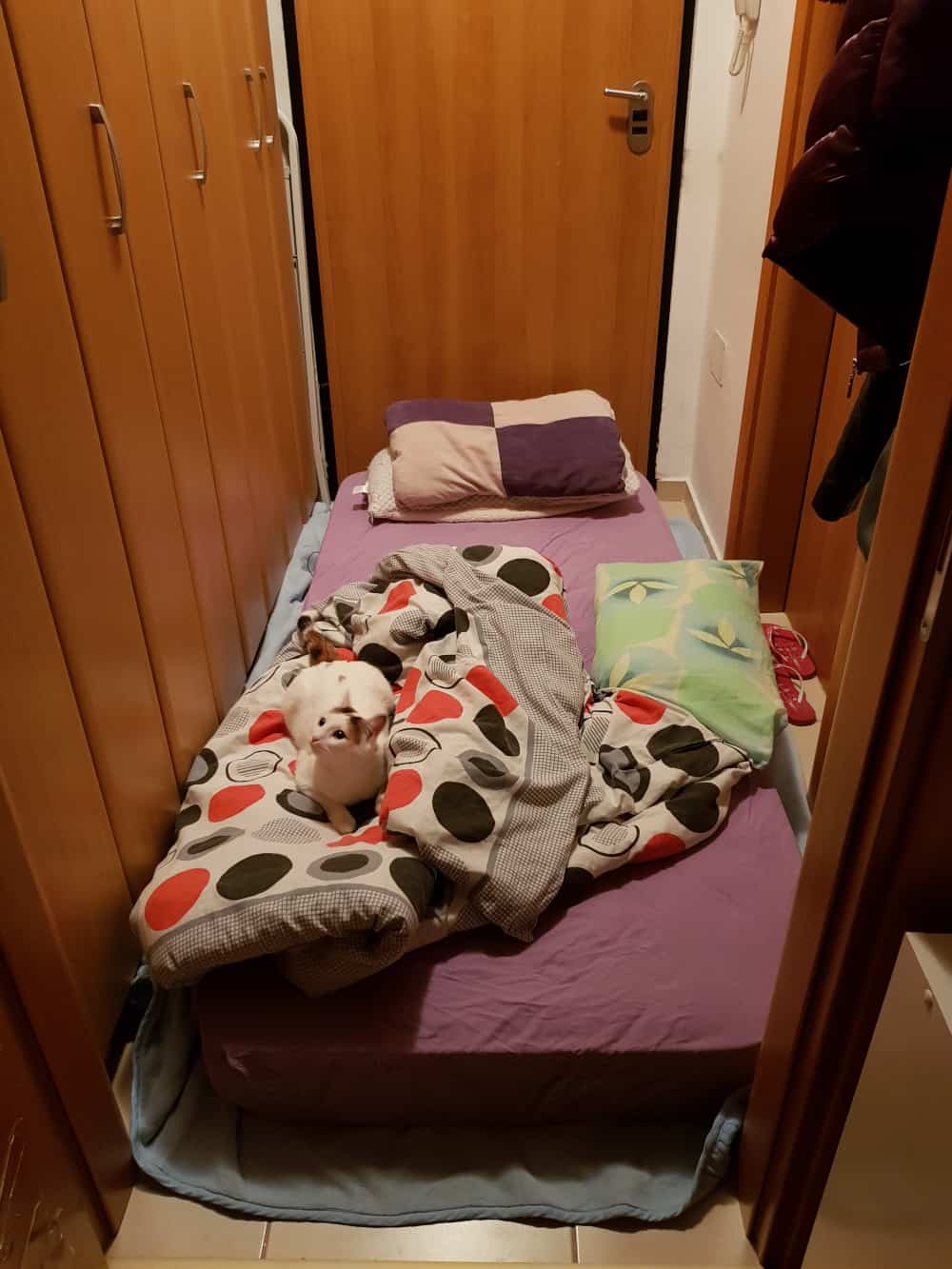 So, on the image on the left you can see my cat Puffy lying on the mattress. Usually, when she gets too playful at night and I need to sleep I put her in this hallway for the night. She has her food there and her cat bed and we both sleep well until 5 or 6 in the morning when she starts scratching on the door and I know it’s time for me to start the day.

I would say most of the time she doesn’t like being in the hallway but I have no choice: I need my sleep to be able to function at work.

But what happened when I moved into the hallway? I closed the door with her being in the main room, on her favorite sleeping place, in warm. She loves sleeping there.

But after a short time, there she was scratching the door, wanting to be near me. So it wasn’t the warmth of the main room nor her favorite sleeping place what she wanted – it was me, to be close to me.

You know they say cats are cold, they love you only for their personal gain but this episode just shows how wrong those opinions are.

Being betrayed, used and left alone by literally everyone in my life, this little love just brings tears to my eyes. My cat has given me more love and compassion that people and friends in my life.

And the story doesn’t even end here:

After realizing that I wasn’t going to sleep sound in the hallway I moved to the couch in the main room. Tthe couch is my favorite sleeping place despite it always being portrayed in the movies as some sort of punishment or unwanted sleeping place.

So I got myself on the couch and my cat Puffy just jumped on me purring and hugging me. I could truly feel how much she needed me and how much she loved me. Her little love was so strong that could be felt and no words were needed.

I am so thankful to God that He created these beautiful, wonderful creatures to be part of our lives.

My cat’s love is sometimes the only love I feel in this world. 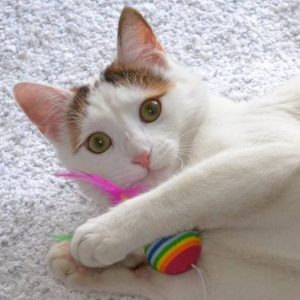 This is my sweet cat Puffy which makes my life so much happier and funnier! Love her endlessly…

The admin of this page is a participant in the Amazon Services LLC Associates Program, an affiliate advertising program designed to provide a means for sites to earn advertising fees by advertising and linking to Amazon.com. Amazon and the Amazon logo are trademarks of Amazon.com, Inc. or its affiliates.

All information found on this site is intended for informational and educational purposes only. The information provided on this website is not intended to be a replacement or substitute for professional veterinary advice.

Most Useful Posts For Cat Owners

This website uses cookies to improve your experience while you navigate through the website. Out of these, the cookies that are categorized as necessary are stored on your browser as they are essential for the working of basic functionalities of the website. We also use third-party cookies that help us analyze and understand how you use this website. These cookies will be stored in your browser only with your consent. You also have the option to opt-out of these cookies. But opting out of some of these cookies may affect your browsing experience.
Necessary Always Enabled
Necessary cookies are absolutely essential for the website to function properly. This category only includes cookies that ensures basic functionalities and security features of the website. These cookies do not store any personal information.
Non-necessary
Any cookies that may not be particularly necessary for the website to function and is used specifically to collect user personal data via analytics, ads, other embedded contents are termed as non-necessary cookies. It is mandatory to procure user consent prior to running these cookies on your website.
SAVE & ACCEPT